The main focus of the Campos group is developing new strategies for cooperative small molecule activation and catalysis using transition metal and main group organometallic complexes. Catalysis is critical to the delivery of future growth and to maintain our quality of life, however, many traditional methodologies are not proficient enough in some fundamental aspects like activity, selectivity or substrate scope. Nature has circumvented these limitations using enzymes with exquisite designs that rely on synergistic and sophisticated cooperative mechanisms. Our main focus is developing homogeneous catalysts that are based on unusual modes of chemical cooperativity with the aim of activating otherwise unreactive molecules and discovering new chemical transformations. We seek to approach the field of cooperative catalysis from a multidisciplinary perspective, combining fundamental concepts from seemingly independent areas, such as Frustrated Lewis Pairs (FLPs) and low-valent heavier main group elements, with transition metal chemistry. On a general basis, our ongoing projects involve the synthesis and characterization of organometallic complexes and cooperative designs, followed by reactivity studies on the activation of small molecules. The most active systems are then examined as catalysts in a range of transformations.

Synthesis. We use common techniques for the preparation and handling of oxygen- and moisture-sensitive organometallic and coordination compounds, including Schlenk and glove-box techniques.

Characterization. Homogeneous systems are characterized through conventional spectroscopic (i.e. NMR, IR, HRMS, UV-vis, EPR) and analytical methods (Elemental Analysis). Students in our group acquire considerable expertise in NMR spectroscopy to provide evidence for the formation of van der Waals complexes vs Lewis adducts, characterize intramolecular LA-LB interactions (including solid-state NMR), as well as to analyze dynamic behavior at variable temperature. Particular emphasis is also given to X-ray diffraction techniques, which are essential to ascertain molecular structures and determine potential TM/TM and TM/Main Group interactions, as well as other weak interactions that students in the group learn to interpret.

Reactivity/Catalysis. Outcomes from reactivity studies are analyzed by the use of common spectroscopic techniques (mainly NMR), as well as X-ray diffraction studies to determine molecular structures of new compounds and intermediates of potential catalytic cycles. We take advantage of conventional methods (NMR, GC, GC-MS) to quantify catalytic activity and selectivity, as well as to identify substrate scope. Our mechanistic studies rely both on experimental results (e. g. kinetics, isolating intermediates), as well as on theoretical input from our collaborators. 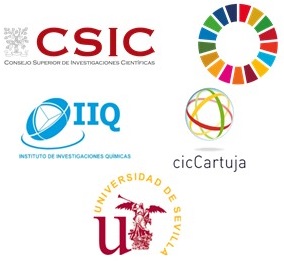